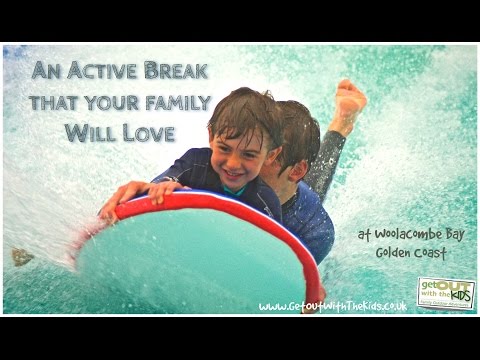 Woolacombe Bay’s Golden Coast Holiday Park has a lot of activities to keep the family busy, plus lots of accommodation options, from static caravans to lodges, and camping or touring.

We popped down to Woolacombe Bay’s Golden Coast holiday village for a fun-filled active weekend in Devon.

Driving to Devon takes us a long time, and so Friday after school and work we set off for Devon.

Despite loving camping, it was lucky for us that the Golden Coast has camping pitches and lodges, so the tent was left behind….which is just as well as we would have been pitching it at around 11 pm at night! The Lodges at the Golden Coast

The holiday lodges provide a great place to stay if you don’t want to camp, take a caravan or motor home, or want to stay in something other than a static caravan. Inside the Exclusive Lodge. The welcome pack was a great addition.

We were staying in an Exclusive Lodge, which was finished out to a very high standard.

The Welcome Pack was a nice addition too.

Here’s what we found at this lodge: Grass and hardstanding camping pitches at the Golden Coast.

For many of us that like camping, the Golden Coast (and the other Woolacombe Bay Parks) provide both camping and touring facilities.

The Golden Coast has a handful of basic grass pitches (around 10m x 10m), and there’s plenty of pitches with hard standing that are ideal for touring.

These pitches are quite large, with enough space for an awning, and include electricity and water. The camping facilities at Golden Coast

As this is a holiday park, you won’t be lacking in facilities either, with plenty of showers, toilets, and wash-up points. Plus, there’s an on-site laundrette, supermarket, and of course places to eat.

Tent Camping and the All-Weather Pitches

These are otherwise known as hardstanding pitches designed for Caravans and Motorhomes, which could sink into any soft wet ground.

While you can pitch your tent on these, it is not something I would personally do, as the gravel base could damage your tent and be uncomfortable. If you do want to put your tent on one of these all-weather pitches, I would advise that you get the following:

One of the great things we found at the Golden Coast was all the activities kids can do.

We didn’t have time to do everything in one weekend, but we did do quite a bit! The Surf Simulator at Golden Coast was excellent

The activity the kids liked the most was the surfing simulator.

Woolacombe is already a place frequented by surfers, but unfortunately, you can’t always predict when there’s going to be good surf.

At the Golden Coast holiday village that didn’t matter as the kids could practise their surfing and learn some new tricks, all in a safe managed environment.

The surf instructor was very good and all the equipment was provided.

The simulator has a roof, so it doesn’t matter if it’s cold and wet outside. However, if the weather does get hot, then the roof retracts back for a bit of surfing in the sunshine. There’s a couple of swimming pools at the Golden Coast: one inside and one outside.

The outside pool has waterslides.

You can also have a go at the water walkers. If your kids have a head for heights, then there’s plenty more for them to do too.

The bungee trampoline was great fun, and your kids could start doing some acrobatics even if they’ve never been on a trampoline before.

There’s also a climbing wall, with different levels of difficulty, and a pirate-themed high-ropes course.

Indoor entertainment and places to eat There’s plenty to do indoors too.

Have a go at bungee running.

Here you have a bungee attached to your waist and you have to run as far as you can. Needless to say, you don’t get far before the bungee pulls you back 😉

There’s also a good-sized bowling alley, amusements, a cinema, pool & snooker, and the usual entertainment you find at holiday parks. There’s a few places to eat too.

There’s the main bar that serves food and is located by the entertainment, and in the day time, a beach cafe is open by the surf simulator.

If you want somewhere quieter, you can visit The Old Mill pub, which has plenty of places to eat inside (upstairs and downstairs), and outside. There’s a playground at the Old Mill to keep the kids happy. Woolacombe is just a short drive down the road.

It has a massive award-winning sandy beach and a lot of the seaside attractions you expect.

When we visited the bus was £5 per person, but that gives you a ticket to use all week. Considering that parking in Woolacombe is £6, you’ll soon cover the cost of the bus if you plan to go to the beach a few times.

We had a great time at Woolacombe Bay’s Golden Coast holiday village. It gets a thumbs up from us as a great place to take your family.

Special thanks go to Woolacombe Bay and the staff who helped us bring this review and let us film the holiday village and their activities.

There are electric hook-ups on grass for tents and on hardstanding for caravans and motorhomes. You can also get a superpitch hardstanding with water services.

Here’s where you can find Woolacombe Bay Golden Coast.

Browse the map below to find places near to Woolacombe Bay Golden Coast. Remember, you can save any place to your Adventure Planner, helping you plan your trip.