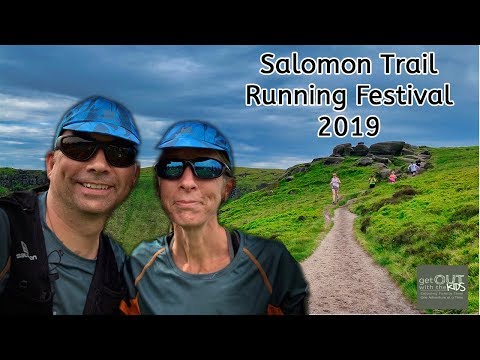 This trail goes from the village of Edale, which you can also get to by train, and up the Grindsbrook path and along the ridge at the edge of Kinder Scout in the Peak District.

For a family, we would rate this route as ‘Hard’, due to the scramble up the rocks at the top of the Grindsbrook path. It is then fairly flat along the top of the ridgeline before you descend back to the village of Edale.
Despite the steep climb, it is still a popular hiking route.

The village of Edale has a couple of pubs to refresh yourselves after the hike. Here’s the profile of the climb. A gradual ascent that gets steeper, relatively flat along the top, and then a steep descent back down.

Instead of walking up this trail, we ran up (and down) it at the Salmon Trail Running Festival 2019. Shell running over boulders at the top of the hill.

The Salmon Trail Running Festival is held at different locations around the country. We went along to the one in the Peak District in the village of Edale. We were a few of the Ordnance Survey #GetOutside champions running this year.

The festival has talks, training, and gear you can borrow, so you don’t need to be an experienced trail runner to take part. Borrowing some Salomon trail running shoes for the event.

Shell borrowed some Salomon Women’s Speedcross trail running shoes, which had amazing grip on the hills. I borrowed a Salomon Advanced Skin 12, which I found very useful for carrying bottles and bits and pieces without having to take a larger and heavier backpack.

There were several trail running workshops. We went on one of these and picked up lots of tips. The trail running workshops are well worth doing to pick up running tips.

There were also two timed runs: a tough 20K run and an easier 10K route. We did this 10K route! Everyone cheering before the start of a timed run.

The Grindsbrook path starts not too steep, but the path soon gives way to a much more rocky climb, getting worse as you approach the top of the trail. How are you supposed to run up this? Everyone we saw walked this bit! Once you get to the top of the trail, you get a good view of what you just climbed up. At the top. It was a hard climb/run up to the top!

Going across the peak

The views and rock formations at the top of the trail are awe-inspiring. The trail at the top is flatter…but, not flat! Shell running up the ridge trail.

Getting back down to Edale

If you are hiking down the path isn’t too bad, though there are plenty of stones to trip over, so be careful.

The bottom part of the trail is paved with stone, but these aren’t even stones.

If you are running down, then take care too. There are plenty of rocks and tripping hazards when running down at speed! A tricky descent if you are running. Not too bad if you are hiking, though.

Edale-Grindsbrook was quite an enjoyable trail, even if the climb is quite hard. You do have a sense of achievement when finished!

Running it was a great twist and we are delighted we went to the Salomon Trail Running Festival to do this route.

Here’s where you can find Edale – Grindsbrook – Kinder Scout Trail.

Browse the map below to find places near to Edale – Grindsbrook – Kinder Scout Trail. Remember, you can save any place to your Adventure Planner, helping you plan your trip.