The Sevylor Tahiti is an ideal entry inflatable kayak that can see your family getting out and enjoying some water fun. This person inflatable kayak solves the problem of transporting a boat to the water in two ways:

Even if you don’t plan hiking with it, it does give you a good idea of how small it goes when deflated, and having carried my inflatable boat, both inflated and semi-inflated over barbed wire to get it to the water, the thought of something that easily goes on your back is appealing.

Where’s this kayak suitable for?

This is really intended for lakes and rivers.  When it comes to rivers, in my opinion I would class it as suitable for leisure paddling only, and not take it down any serious rapids.

An advantage the kayak design has over flat bottomed boats is that they cut through the water more and less prone to getting blow by the wind.  If you’ve every tried to row an inflatable boat across a large lake in any sort of breeze you’ll know what I mean.

The hull on this canoe is certainly better than a flat bottomed inflatable boat, it is doesn’t have a well defined keel as you would expect (and need) on a rigid sea kayak, and hence stick to lakes and easy going rivers. As with most inflatable craft, this Sevylor Tahiti uses a large boston valve to make inflating and deflating quick and easy.

Personally we have both the Sevylor hand pump and also use our trusty Coleman 12V pump to inflate our inflatable boats. Another feature of the Sevylor craft is the easy inflation indicator, ensuring you have inflated enough, but not over inflated.

Is it good for the kids?

We think this inflatable kayak is an ideal option for family activities on the option – especially as it enables you to get out and start having fun at a good entry price.

We were considering getting the Sevylor Tahiti for our two older kids, but decided to purchase two one-person Intex Challengers instead (so that they could learn to paddle individually). 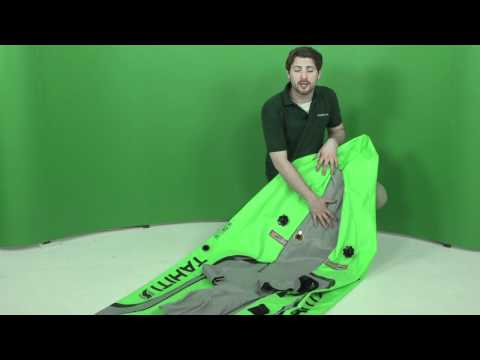 We search for the best prices from information supplied to us by many retailers. Occasionally, the price for a related accessory is shown by mistake. If you see that, then please let us know.
We may receive a small commission if you buy the item after clicking the link, which helps keep this website running and does not increase the price you pay.