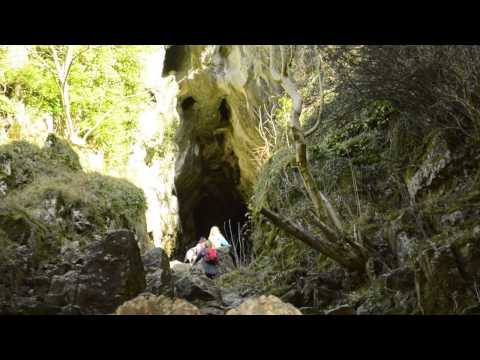 Dovedale is a picturesque valley that’s great for family walks alongside the River Dove. Park at NT Ilam and go for an explore. There are many different sides to the Peak District. You can see a few of them as you stroll down the Dovedale valley.

There’s a carpark next to the River Dove at the start of the walk. However, we found the carpark quite busy.

Just a short stroll from the carpark at the River Dove is Ilam Park, where parking is free to NT Members 😉 Ilam Park is impressive with its gothic architecture, but you may be surprised to learn that you can sleep in the main building, Ilam Hall.

Ilam Hall is run by the YHA, which has family accommodation, making it a great base for exploring Dovedale and the surrounding area.

We were staying at another youth hostel at the time, not too far away.

Setting off from Ilam The stroll from Ilam is traffic-free (apart from in the village).

Walk past Ilam church and head for the road bridge that crosses the River Manifold.

Don’t cross the bridge but cross over the road, then follow the road that runs next to the River Manifold.

You’ll see a footpath on the other side of the road that heads up and over a hilly field.

The Footpath to Dovedale

Just follow the footpath. Be prepared for mud as you cross the fields.

The footpath will bring you out at the Dovedale car park.

Walking alongside the River Dove

There are two paths that run down the side of the River Dove.

On the left, the path is paved and smooth, and ideal for pushchairs.

Alternatively, you can cross over the footbridge and walk along the rougher path. At the end of the smooth path, you’ll get to the stepping stones.

You may recognise these stepping stones as they’re featured in many of photos of the peak district.

The stepping stones are flat, so you’re unlikely to fall in, though if you have a dog with you, they may not resist the urge to jump in!

Carrying on down the River Dove The path follows the river Dove and you’ll soon be surrounded by steeper hills either side of you, with some impressive cliff faces and towers of rock.

We continued walking until we got to Reynard’s Cave. A large stone arch guards the entrance to Reynard’s Cave.

The climb up to the cave is a bit steep but worth doing.

A few years ago a climber found an old coin in the cave.

The coin led archaeologists to a buried cache of Iron Age and Roman coins, now known as the Dovedale Hoard. After visiting Reynard’s Cave we doubled back on ourselves and climbed Thorpe Cloud. There is a path that leads up the Cloud near the Dovedale stepping stones.

You first see this hill from Ilam. It’s the hill with the distinctive flat top.

The hill looks steep, and it is quite a climb, but it’s not actually that high. That’s what we found with this area of the Peak District: all the hills looked like mini-mountains. At the top, Thorpe Cloud is anything but flat.

You can carefully descend down the other side of Thorpe Cloud, which will take you back to the footbridge near the Dovedale car park.

From there it’s just a short walk back to Ilam.

You can see our Dovedale route in this video.

Planning your visit
Facilities
Parking
Dogs Welcome
How to get here

Here’s where you can find Ilam and Dovedale Walk.

Browse the map below to find places near to Ilam and Dovedale Walk. Remember, you can save any place to your Adventure Planner, helping you plan your trip.