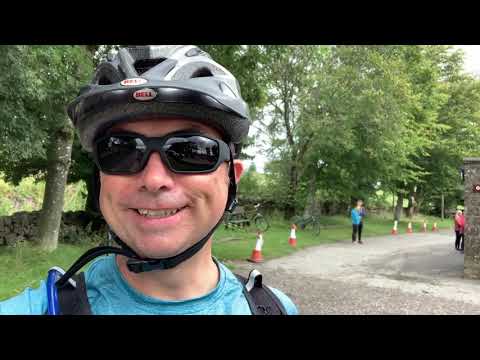 We started this ride at the Middleton Top car park (which is Pay and Display, btw), which is a great place to access the High Peak Trail.

You can start the High Peak Trail a bit further back from here, but you’ll need to climb some very steep hills. This used to be a railway line, and so it’s relatively flat. Apart from the approach to Middleton Top, where trains had to be winched up the hill by a giant steam engine. You can still see the chimney to the engine house at Middleton Top.

Even if you do avoid the worst hill, not long after cycling past Middleton Top, you’ll hit your first hill. This isn’t too bad, but for legs not used to cycling, people may need a bit of encouragement to get up it. Recovering after the first climb after leaving Middleton Top.

The trail continues along much flatter route all the way to Parsley Hay.

One thing to note is that there are many crossings with gates on the High Peak Trail. These are bike-friendly gates but do get annoying after a while. Opening one of the many gates on the High Peak Trail.

Parsley Hay is another rest stop. This one serves both the High Peak and Tissington Trails. There’s toilets, cafe, bike hire, and a car park here, so it makes another great place to park and cycle either the High Peak or Tissington Trail.

Travelling from Parsley Hay down the Tissington Trail was very easy as it was mainly downhill.  It definately has a slight gradient, unlike the High Peak Trail that was mostly flat (apart from the hill at the start, of course). The old signal box at Hartingon

A short distance along the trail you can see the old railway heritage at the Hartington Signal Box.

The High Peak and Tissington Trails feel very different. The High Peak Trail is very much along the top of the peaks. You see wide open landscape. One the old bridges you pass under on the Tissington Trail

I continued along this trail until reaching the old Tissington Station, which has another car park when you can easily reach the trail. The old platform at Tissington Station

Cycling from Tissington back to the High Peak Trail

There is a marked route on the trail map that you can take down country roads and cycle from Tissington, via Carsington Water, and back up to the High Peak Trail. This takes in part of the National Cycle Route 547, which departs the roads and goes off-road for small section. Route 547 heads from Tissington on the trail to Carsington Water.

Unfortuantely, the road to Carsington Water was closed, and so I took another route via Barrington village and back up to the High Peak Trail.

Warning: this is a steep route!

Unlike the High Peak or Tissington Trails, the roads in-between them are steep. It is the Peak District afterall.

So, this isn’t one for young kids – or most kids of any age – unless they are used to cycling up some very steep hills.

This was a good cycle route. However, out of these three trails, if you just had to cycle one, we would advise you to cycle the Monsal Trail. We found that the most scenic and had the most tunnels. It’s also really flat, and easy for kids to pedal.

Here’s where you can find High Peak and Tissington Trail Circular Cycle Route.

Browse the map below to find places near to High Peak and Tissington Trail Circular Cycle Route. Remember, you can save any place to your Adventure Planner, helping you plan your trip.