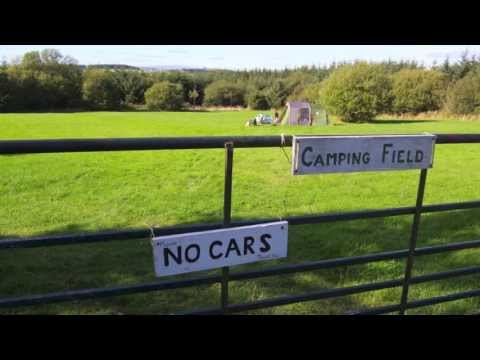 Nipstone Camping is a back-to-basics campsite in the Shropshire Hills.

Staying at Nipstone Campsite can be summed up with these words: beautiful countryside, child-friendly camping with campfires, surrounded by woodland, wildlife, and walks.

There’s plenty to see and do with the family right on the doorstep of the campsite.

One night is unlikely to be enough here. We advise you to try and get to the campsite early, get set up, and go for a walk.

The camping field doesn’t allow cars, and so this is a great place for the kids to run around…but they are not the only things running around as you share the field with a few free-range chickens during the day (and yes, you can buy fresh eggs). A wheelbarrow can be used to transport your items into the camping field, which has a gentle slope.

You are provided with a spade to take the turf off an area for your fire, and then you make it good before departing, leaving no trace. This is the kindling bundle, complete with firelighter, that was provided with our two buckets of seasoned logs at Nipstone Camping

More campsites should do this in our opinion. The owner was telling me they had over 100 campfires during the summer, but you couldn’t see any burnt grass.

This is a small campsite compared to bigger holiday parks. We went on a glorious September weekend and had the entire campsite to ourselves.

There is drinking water, a flushing toilet, and hot water.

Wood is available to buy from Nipstone Camping. We had two generous buckets of logs, plus a well-put-together bundle of kindling.

Wildlife and things for kids to spot We rescued this newt from our fire pit

It’s not surprising that there’s plenty of wildlife around the Nipstone campsite.

We were greeted with a huge Buzzard flying over the site, and then I had to rescue this small newt from our fire pit. The kids also found a huge toad outside the toilet at night, which they named George. Nipstone Camping is situated between boarding kennels and a rifle range, so in the day you may hear some barking and some rifle shots, but at night during our stay at Nipstone, it was very quiet.

You are right out in the countryside, upon a hill, so it gets very dark – there’s no street lights up here.

You are also surrounded by woodland so listen out for the owls (they hooted for us)…and there are some pigs in one of the woodlands next to the camping field, which makes for some interesting noises.

So, start up a campfire, tell some stories, or go for a nighttime ‘spooky walk’. You don’t even need to make up any stories – just research some of the local legends and myths! (See below) About the Area: The land of myth & legend, history, and beauty

The Long Mynd range of hills in Shropshire: moorland, grassland, and forests. Great for family hikes.

Deep in the heart of the UK, in a land far far away from big cities and motorways, are the Shropshire Hills. An area of outstanding natural beauty and heritage.

With its rolling green hills and thousands of small villages, it is believed that Shropshire influenced J.R.R. Tolkien’s “Shire” from Middle-earth after the author had spent time living in the county.

The county of Shropshire has one of the most diverse geologies in the country and has varied landscapes to match.

Shropshire has not always been a sleepy backwater though.

Long ago it was heavily populated with Bronze Age and Iron Age settlements including one of the largest hill forts in the country. The Romans built one of the country’s largest Roman cities here. It was an important centre for the Norman’s after their invasion. It was the badlands in the war between England and Wales with the area changing between the English and Welsh – and is scattered with remains of castles from that era. It is still littered with medieval towns and villages, and there are lots of Tudor buildings and towns you can still walk around today. It was the birthplace of the industrial revolution and built the first iron bridge and iron-framed building…..BUT…the landscape here is stronger than humans: cities, castles, and much of the industrial heritage have all but gone; the landscape remains.

A large area of the Shropshire Hills is the Long Mynd (from the Welsh, “Long Mountain”), and is now managed by the National Trust.

The ‘Mynd’ is the foothills of Wales, spilling over onto the flatter English countryside. Follow the undulating hills West into Wales and you soon reach the mountains, the land of dragons and King Arthur, and the mountains of Snowdonia. Nipstone Rock, just as the sun was setting. This is just opposite Nipstone Camping.

Much of the Long Mynd is rolling hills and moorland and has some amazing walks. However, there is a hill that has very different geology with towering craggy rocks – one of which is called ‘The Devils Chair’ and local legend says that when the clouds are covering the top of the hill, Satan himself sits in the chair…. (and there are a few other creepy stories too!) Sunset at the Nipstone Rock. This photo deserves a soundtrack!

This ‘Devil’ hill is called the Stiperstones.

Further along this hill, away from the Devil’s Chair, is another set of craggy towering rocks, known as Nipstone Rock, and that’s where you can find the Nipstone campsite.

The Stiperstones was extensively mined (even by the Romans). Some of these mines have been preserved, and you can find more about the area’s mining past at The Bog Visitor centre, which is a short walk down the footpath that runs along the back of the campsite. This is the Somme Tunnel at The Bog on the Stiperstones Hill in Shropshire. On open days you can go down this tunnel.

There are even open days throughout the year where you can go down some of the mines (run by the Shropshire Mines Trust).

The villages up and down the Stiperstones hill are largely from the cottages that the minors and their families lived in. In fact, the cottage at Nipstone camping was once a minor’s cottage.

You can also take a walk up the hill from Snailbeach, a small former mining village at the foot of the Stiperstones hill, past old restored mines and off the track to some old mining homesteads, where Natural England has restored some cottages (see pictures and route here).

You can find some walking routes for the area here.

The Stiperstones Inn is just a short drive down the hill.
You can also visit the cafe at The Bog Visitor’s Centre, which is just down the road.

Here’s where you can find Nipstone Campsite.

If you are coming from the Minsterley direction, you can take the turning on the left to Snail Beach. Go past the old mine workings and drive up the winding country road, past the Stiperstones village, and all the way up to ‘The Bog’.

An alternate route is to keep going past the Snail Beach turning. After a few miles, your Sat Nav will send you up a road on the left (this is the same way you go if coming from Wales).

Either direction will take you to the ‘The Bog’. Drive on past the visitor’s centre, and where the road bends round to the left where the main Bog car park is at the old mine workings, you want to take the very small road that goes straight on.
Carry on up this road. You will pass some fields, and then pass a boarding kennels.
Nipstone campsite is the next farm on the right.
If you go as far as the small car park at Nipstone rock then you’ve gone too far – but the campsite turning is almost opposite Nipstone rock.

Use the map below to get a general direction, though note that Google’s satellite picture is very very old – long before the campsite existed. The area is now surrounded by woodland.

Browse the map below to find places near to Nipstone Campsite. Remember, you can save any place to your Adventure Planner, helping you plan your trip.