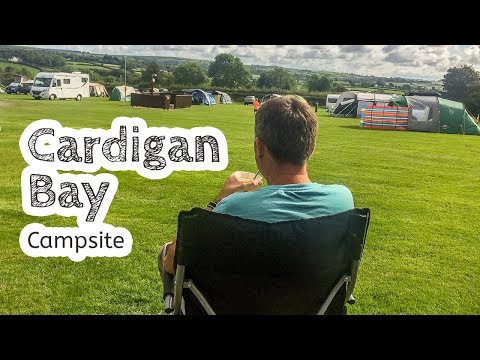 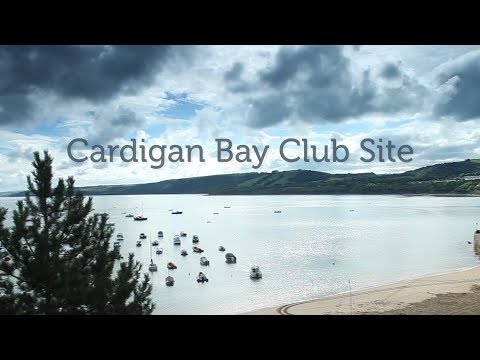 Just inland from New Quay in Wales is the Camping and Caravanning Club’s Cardigan Bay Campsite.
As well as tents, caravans, and motorhomes, Cardigan Bay has the Ready Camp safari tents.

In the last August Bank Holiday, we decided to visit the Cardigan Bay Campsite in Wales.

The Campsite is just up the road from the picturesque village of New Quay. Yes, there’s another one. This New Quay is not as big as the one in Cornwall, but I would argue, it’s more picturesque. New Quay in Wales is smaller than its namesake in Cornwall, and more picturesque.

From the harbour walls at New Quay, dolphins are spotted almost daily. You can even go on a dolphin watching boat trip. We did this with SeaMor and did sea a dolphin plus the kids were able to touch a small shark. Dolphins are spotted almost daily from the lookout points on the harbour wall.

There are a few beaches at New Quay. Some allow dogs; some don’t. You’ll find lots of beaches along this stretch of coastline. For example, travel a little further south into Pembrokeshire to the award winning Poppit Sands, which has lifeguards during the summer. Looking down on one of the beaches at New Quay (Wales), just down the road from the campsite – about 8 minutes in the car. Yes, we had blue sky and a blue sea!

The approach to the campsite isn’t particularily difficult, though it is a narrow lane with passing places. Fortunately for us, we only encountered two cars coming the other way as we towed our caravan into the campsite.

Cardigan Bay campsite has a number of different camping fields, and if you bring a dog, there are two dog walks on site.

In the middle of the campsite are the facilities. These are a little dated, but kept clean and work well. The outside wash-up area at the campsite The indoor washing up area at Cardigan Bay Campsite

Some pitches are on a slight slope but it’s not a hilly campsite.

New Quay and the Area

New Quay has gift shops and a few interesting places to eat, such as a pizza restaurant where you can look out over the bay. The small harbour at New Quay

Getting to the parking at the sea front can be tricky through narrow lanes (which are crowded with people in high season), and it’s not somewhere you want to go if you are in a motorhome driving to New Quay from the campsite.

Fortunately, just as you enter New Quay, there’s a large car park that can take motorhomes, so you don’t need to try and manoeuvre through the narrow one-way system.

If you like pizza, campfires, and big tipi tents, then head to the Pizza Tipi.

It’s about half an hour’s drive from the campsite in Aberteifi (Cardigan Town) down by the Quay near the bridge.

A really interesting place to visit with two big roaring wood fires in the centre of each tipi, keeping them warm. The Internet is provided by the Club Wifi. You have to pay for access.

There is one shower block on site.
The showers are free.

The campsite has many EHUs, both grass pitches and hard standings.

The campsite is open from the end of March until the start of November.
You don’t have to be a member of the Camping and Caravanning Club to stay at this site, but you do get a discount if you are a Club member.

Here’s where you can find Cardigan Bay Campsite.

The Post Code may not take you to the right place. Please use the directions available on the campsite’s website.

Browse the map below to find places near to Cardigan Bay Campsite. Remember, you can save any place to your Adventure Planner, helping you plan your trip.