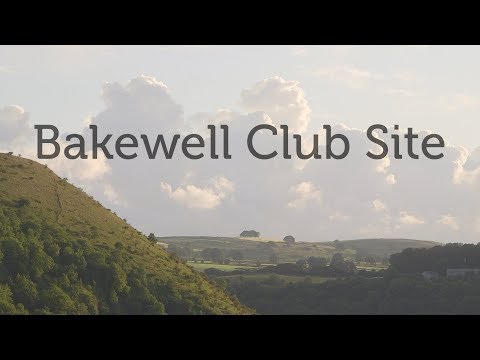 The Bakewell Club campsite is located near the village of Youlgreave in the Peak District National Park.

Bakewell Camping and Caravanning Club Campsite isn’t actually in Bakewell, but just outside in a small village called Youlgrave, in a rural setting down a small lane. What’s different with the Bakewell campsite compared to other club sites, is that this campsite doesn’t have a toilet or shower block.

There is water, power, and chemical disposal, though. Fortunately for us, we were visiting in Casper the Caravan, so we brought our own toilet and shower with us 😉 But don’t let the lack of facilities put you off. Bakewell is a great campsite with a back-to-nature feel, plenty of rural views, and space for the kids to run around, including a play park.

It is a hilly site, but we had a level hard standing. The approach is what I didn’t like to this campsite, especially as I was towing a caravan.

From the direction we approached, we had to weave through parked cars, and then take a sharp right on a narrow road. Getting the caravan around was very tight!

But that was just the start of the fun and games.

The route from the village is down a narrow single traffic lane. When we arrived (8 pm on a Friday Night) it was dark, and many people were home, and so the lane was full cars. Some parked on the left, and some parked on the right.

That meant a lot of weaving.

Plus, there was traffic coming the other way, and with no place big enough to pull in with a caravan, it made it more than a bit challenging for us first-time caravanners.

When we left (11:30 am Sunday morning), the lane was less busy. We also took a different route and turned right (North) at the end of the lane, which is a much easier turn, though one of you will have to spot traffic as it is a blind bend.

IMPORTANT: This campsite doesn’t have a toilet or shower block.

The Bakewell campsite is typically open from March through to the end of October.

Here’s where you can find Bakewell Campsite.

Browse the map below to find places near to Bakewell Campsite. Remember, you can save any place to your Adventure Planner, helping you plan your trip.