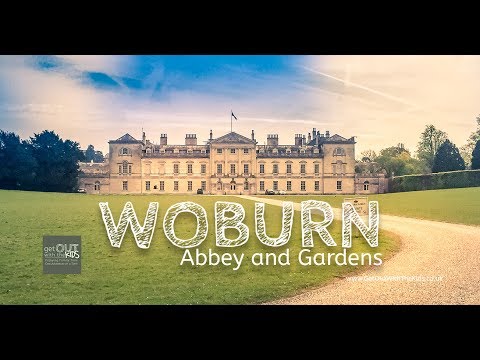 Woburn Abbey and Gardens (and Deer Park) are all located together opposite Woburn Safari Park.
The Abbey is closed, currently undergoing refurbishment, until Spring 2021.
Despite the Abbey being closed, the gardens and grounds are still available to explore.

Despite the name, Woburn Abbey isn’t actually an abbey. It’s one of the grand Treasure Houses of England.

It used to be an abbey, just like the one we visited during our caravan challenge to Fountains Abbey. However, this time, the 5CChallenge took us to Woburn in Bedfordshire, and to this sizeable stately home that sits on the location of the former abbey.

You aren’t normally allowed to film or take pictures inside the abbey. However, on this occasion, the Duke kindly permitted us. In more recent times, ever since the previous Duke, Woburn Abbey has been welcoming visitors. They even opened the nearby Woburn Safari Park on their land (see separate post for our visit there). Woburn Abbey has quite a few grand stately rooms. You can also see areas where they have been uncovering its past decor, such as the wallpaper in the picture above.

Despite the grandeur and the visitors, the Duke and Duchess live here with their family in their private apartments though they have opened up some of these rooms for the public to see.

These rooms have a more modern look and feel a lot more homely than the period features. We think it is great to see an old building as it would have been through different ages, including right up to today.

There are also some things you don’t expect, such as this shell-covered grotto. Every house should have a grotto!

As you would expect, there’s quite a lot to see outside too. Completing the Maze at Woburn Abbey

You’ll pass through a lot of the grounds during your drive into Woburn Abbey. Watch out for some of the deer. Woburn Abbey is open every day from mid-April until the end of October between 11 am and 5 pm (last entry to the Abbey is at 4 pm).

There are a number of different ticket options, including a Family Ticket for 2 adults and 2 children.

Here’s where you can find Woburn Abbey and Gardens.

Browse the map below to find places near to Woburn Abbey and Gardens. Remember, you can save any place to your Adventure Planner, helping you plan your trip.