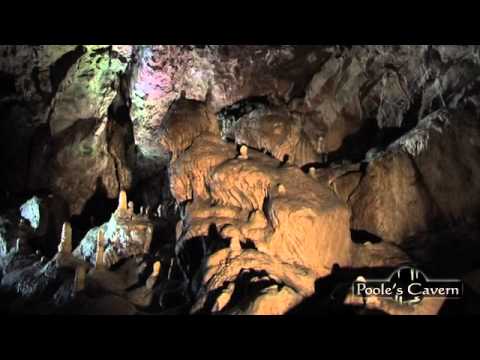 The Peak District is well known for its famous rocky peaks and hills, but at Poole’s Cavern, you get to see them from a totally different perspective: underground!

Underneath the hillside in Buxton, where families walk or swing through the trees at Go Ape, is a cavern, known as Poole’s Cavern, and we went along to check it out.

From the outside, you’d easily miss it, as it nestles in the corner of the car park behind a cafe (which was rather good, btw).

Inside the cavern though is another dimension, full of stalagmites and stalactites, and the drip, drip, dripping of the water that creates them. This is just inside the Entrance to Poole’s Cavern where Bronze Age, Iron Age, Roman, and even evidence of a Highwayman was found

The cave had been used for thousands of years. A bronze age fire pit was found near the entrance, some iron age bodies were discovered, and hundreds of Roman artefacts were discovered. It is believed the Roman people left items as offerings to the water goddess, which the Romans named Buxton after. The River Wye runs through the Cavern.

Even a highwayman once used the cave as it was a great hiding place where he could melt down the silver he had stolen.

The Victorians were the ones that turned the cavern into a tourist attraction. One of the Victorian gas lamps still remains in the cave. These are the fastest-growing stalagmites and stalactites in the world.

Fortunately, there are no working gas lamps anymore and the cavern is now lit by modern lighting.

You are taken around by a knowledgeable guide who will tell you about the history and how the formations in the cave were made.

It isn’t just a little cave either. We were surprised at how long it was, and there’s more of the cavern that hasn’t yet been reached by anyone. It’s hard to believe this is beneath Buxton

The tour lasts about 45 minutes, but we spent longer there as they had a good little shop and cafe.

There is a Pay and Display Car Park (which you use for Buxton Country Park and/or Go Ape too), which was £1.50 for 4 hours when we visited.

A family ticket to Poole’s Cavern was £25. Go Ape next to Poole’s Cavern in Buxton

If you have older kids, you could combine your visit with Go Ape that is right next door.

At the time we visited, this Go Ape didn’t have the Tree Top Junior course, so participants would need to be 1.4m tall. See our Family Guide to Go Ape.

There’s also the Buxton Country Park that you can take a stroll around, which is right above the cavern.

Here’s where you can find Poole’s Cavern.

Browse the map below to find places near to Poole’s Cavern. Remember, you can save any place to your Adventure Planner, helping you plan your trip.