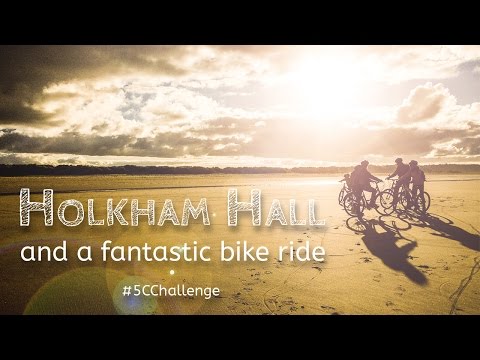 Holkham Hall is a historic Treasure House, right next to the coast, in Norfolk.

Admiring Holkham Hall as we stop on our bikes

Holkham Hall is another impressive Treasure House we visited while doing the #5CChallenge. Watch out! Tom is driving the tractor!!

It sits just off the Norfolk Coast. We visited while staying at the Camping and Caravanning Club Site that is within the grounds of another impressive stately home, this time belonging to the Queen: Sandringham.

The Coke family still lives in the Holkham ‘House’, and so despite the usual impressive stately home features, such as grand entrances, staterooms with large paintings, and statues everywhere, there was a touch of homeliness to some of the rooms with typical family photos and a touch of a more modern feel.

Mind you, Thomas Coke is the Earl of Leceister, and so it’s not your usual family home! The living room was more homely than stately The Holkham grounds were quite extensive

Holkham House is set in an impressively landscaped grounds, with deer roaming freely.

When we visited it was the end of October, and so the stags were rutting. Deer roam around the grounds A view back at Holkham Hall A little way from the house is the Walled Garden. As we were visiting in Autumn, the walled garden was impressive but not at its best, as you would expect for that time of the year.

The grounds offer good walks to stretch the legs, especially if you walking from the house to the walled garden.

If this is a bit far for you, or you are running short on time to see everything (as we were), then you can hop onto one of the buggies that carry people around the grounds.

Sitting on the back of the buggy was great fun.

Refreshments and Field to Fork

When we visited they had a farming exhibition called Field to Fork, which shows the journey of food from the fields to our plates, both then and now. Another way to get around the Holkham estate is to hire bikes.

They have adult bikes, child bikes, bikes with tagalongs, and bikes with child seats. Helmets are provided too, and the staff very helpful with route suggestions. Take advantage of the bike hire at Holkham Hall

We all hired bikes and pedalled off to Holkham Beach. The wide and long Holkham beach

Just down from Holkham House is Holkham Beach. An impressive vast expanse of sand dotted with sand dunes. At least it is when the tide is out. Cycling down to the shoreline was great fun Soft sand was hard to pedal on Holkham beach goes on for miles Cycling late into the afternoon Sun is getting lower in the sky Although the sand was a bit too soft for bikes in a few places, it was mainly firm. It was great fun paddling along the shoreline and not something we were expecting to do at a Treasure House.

Here’s where you can find Holkham Hall.

Use the postcode NR23 1RH for your satnav.

Browse the map below to find places near to Holkham Hall. Remember, you can save any place to your Adventure Planner, helping you plan your trip.