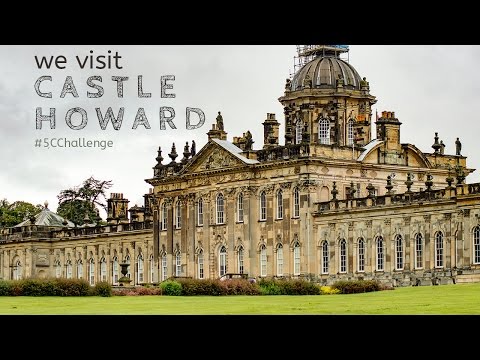 Castle Howard was built over 300 years ago and sits in an Area of Outstanding Natural Beauty just outside York.
As well as the castle, there are acres of parkland to explore, with temples, lakes, a play park, and a children’s activity trail.

We were driving to Slingsby Campsite in North Yorkshire, passing fields and woodland in a rural landscape when suddenly a tall column appeared. A column in the middle of nowhere!?!

Our first reaction was, “what is this doing in the middle of nowhere?”

what is this doing in the middle of nowhere?

It was, of course, part of the Castle Howard estate, which became clear the closer we got and approached a huge gatehouse that straddles the road. One of the gatehouses

On this first encounter of Castle Howard, we were towing Casper the Caravan, and with warnings of a very narrow passageway, we detoured around it.

we were towing Casper the Caravan….we detoured around it

But the next day we visited Castle Howard without the caravan.

To sum it up: a huge palace and parkland in the North Yorkshire countryside.

This was not something we were expecting at all. It is a palace. A view of Castle Howard from the gardens.

As you approach Castle Howard from York, you pass the tall column and then go through two gatehouses, before arriving at an Egyptian Obelisk in the middle of a roundabout that takes you into the car park.

Castle Howard was certainly built to impress, and to see much of it, expect to spend most of the day and plenty of walking (though there is a ‘train’ to take you around if you don’t want to do too much walking!) This is not a Castle with turrets, but instead, a palace. It wouldn’t be out of place in any of the wealthy Northen European capitals.

It wouldn’t be out of place in any of the wealthy Northen European capitals.

Just as with the outside, the inside of the castle is built to impress, with its carvings and high ceilings.
It certainly doesn’t have a homely feel, though parts of the castle are still lived in by the owners.

Not surprisingly, Castle Howard is used as a location for film and television.

A pano of the interior There’s plenty of space at Castle Howard. Enough to wear the kids out (and the grown-ups too!).

There’s plenty of space ….Enough to wear the kids out (and the grown-ups too!)

One thing Castle Howard isn’t short of is lakes.
You can walk around the lakes near the Castle. These lakes drop down in levels via a series of waterfalls.

There’s also one very large lake where you can take boat trips.

This area also has a boathouse cafe, a play park, and a few fairground attractions. On an estate this size, it’s not surprising that there are some woodlands to explore too.
When we visited, there was a children’s trail to do, which involved brass rubbings of the prints different animals leave behind. Here’s where you can find Castle Howard.

Castle Howard is just 15 miles northeast of York and easily accessible from the A64 which connects Leeds, York and the Yorkshire Coast.
Note that if you have a wide vehicle or are towing a caravan, there is an alternative route signposted to avoid the narrow gatehouses.

Browse the map below to find places near to Castle Howard. Remember, you can save any place to your Adventure Planner, helping you plan your trip.

If you book a year in advance, you get the current year’s prices plus 20% off.