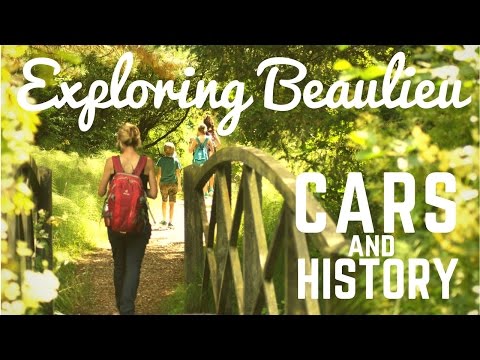 Beaulieu has lots of variety. It is both an old house and abbey remains nestled in the New Forest, and it is the National Motor Museum.

We visited Beaulieu as the first Treasure House on the Great Family Treasure Hunt Challenge.

Parking up at Beaulieu

When we arrived we parked up in one of their big car parks. Immediately we could tell Beaulieu was geared up to take a lot of visitors.
<blockquote”>we weren’t towing ‘Casper’ the caravan

Parking was free, and although we weren’t towing ‘Casper’ the caravan, we would have been able to park it there. This is good, as we’re finding there aren’t many places you can stop off at when you are towing a caravan. As we had brought our dog, we decided to take the Mill Walk down to the main house to stretch the legs.

The Mill Walk starts just after the entrance, and you turn right down a path before reaching the monorail, which is another way to get around Beaulieu (though dogs aren’t allowed on the monorail).

Although you might be tempted to dive straight into the museum, a walk through the woods might be worth planning during your stay, especially if you have kids. Fairy Houses in the Woods

Get them to try and spot the little fairy houses in the bottom of the trees. The Mill Walk will bring you out in front of Beaulieu House.

On the lawn when we visited were some Victorian lawn games. Playing Shuffleboard on the Lawn

We had been challenged to a game of shuffleboard between the adults and the kids.

This time around, the adults won, though I think this was down to luck rather than any skill 😉 The oldest part of Beaulieu dates back to when it was a gatehouse to the old abbey. However, much of the house was developed in Victorian times.

As with many old houses, there’s quite a lot of history within its walls. During the Second World War, Beaulieu was home for ‘SOE’ training.

SOE was the Special Operations Executive that trained agents that were sent behind enemy lines.

On display were some of the things they had with them, such as pencils that are fuses for detonators. The ‘James Bond’ of their time. Just next to Beaulieu house is the remains of Beaulieu Abbey, which dates back to Norman times. In addition to the House and Abbey are the Gardens to explore. There are a couple of ways you can get around Beaulieu.
You can either walk through the gardens and Mill Walk or, you can take the Monorail.
The Monorail has two stops. The first is at the National Motor Museum; the second is closer to Beaulieu house.
There’s also commentary on the Monorail, so even if you walk around the ground, it’s well worth taking the Monorail to see things from a different angle and get to learn about the place at the same time.
Oh, and it’s free 😉

The National Motor Museum is probably what most people visit Beaulieu for.

This is packed full of classic cars and bikes, through to some from the more modern era.

Here’s just a small selection of what we saw. Of course, visiting Beaulieu while doing the Caravan Challenge, we found it interesting seeing a car caravan from times gone by.
Fortunately, the new caravan we’re using has a lot more space for a family 🙂

Cars from Film and TV

You’ll also spot some cars from the screen.

Beaulieu is also home to the Top Gear Museum, including the Top Gear Enormodrome, which recreates the Top Gear Studio.
They have a few items from the Post Clarkson era too.

Beaulieu’s postcode for your satnav is SO42 7ZN or take Junction 2 of the M27 and follow the brown and white tourist signs to Beaulieu and our visitor entrance.

Car Parks are free, and if you visit with a Caravan or Motorhome, then you are allowed to park in the coach park. There are no height restriction barriers to the car parks.

Browse the map below to find places near to Beaulieu Treasure House & National Motor Museum. Remember, you can save any place to your Adventure Planner, helping you plan your trip.